[Guest Blog] The 4 key elements of word-of-mouth: A systematic approach

This so-called word-of-mouth marketing is different from paying “influencers” to sponsor your products, for one simple reason. If the headteacher of one of your schools tells the headteacher of another school about your product or service, that recommendation will count for a great deal because it hasn’t been bought. And that’s the thing: you cannot pay someone to do word-of-mouth marketing. So-called “influencer marketing” isn’t the same: if you pay someone to sponsor your product, they have an obligation to declare their endorsement as a form of advertising (see The Influencer’s Guide pdf. Even if they genuinely love your product, who is going to believe them? For these reasons, a recommendation from a friend or colleague is likely to be seen as genuine, especially if it’s unsolicited.

The only problem is, word-of-mouth marketing is in the hands of your clients or customers. You can’t make them tell people about you. You can’t pay them to do so (well, you can, but then the value of their recommendations would diminish in the eyes of their colleagues). Wouldn’t it be great if businesses could control word of mouth?

I’ve been reading a book called “Talk Triggers: The complete guide to creating customers with word of mouth”. The authors, Jay Baer and Daniel Lemin, carried out research to see if there are ways that a company can instigate word of mouth in a systematic/strategic way rather than relying on chance.

There are quite a few books on word-of-mouth marketing “out there”, but most of the ones I’ve read tend to be either full of examples but no strategy, or very dry and almost academic with few examples. “Talk Triggers” synthesises these two approaches. There are plenty of examples of what companies have done to stimulate word of mouth, but in addition, the authors have gone a step further by analysing exactly why certain ideas worked while others didn’t.

Now, there’s a lot in this book, and there isn’t much point in my summarising the whole thing here. However, it’s worth honing in on the section called The Four Talk Triggers Criteria, because you might be able to start putting them into practice straight away. Here they are:

Literally, this means “worthy of remark”. The authors have a (typically American!) saying: “Same is lame”. If you do the same as everyone else in the industry, what is remarkable about you? I imagine that when the first wi-fi infrastructure company offered schools a free report on their current system and what they needed to do to improve it, that must have been seen as amazing. But these days (apart from the small matter of a pandemic) it’s expected.

It’s a challenge to think of what to do in order to stand out, but from the examples given in the book, it doesn’t have to be anything fiendishly difficult. One company, for example, makes it easy for customers to call the CEO. Another one is fully transparent about its pricing structure. That may seem banal, it’s simply an acknowledgement that while you understand it, potential clients may not. It might be as simple as always quoting the price the customer will pay, not a fictitious “list price” that nobody pays.

Ideally, anything you do, or give to people, or make available as a competition prize, should be relevant to your business. The authors cite the fact that many companies give away iPads. Why would you do that? Unless you’re Apple or an electronics retailer, surely an iPad is irrelevant — unless you wish to advertise a rival’s product of course!

A better idea for an ed-tech business might be to run webinars or (online) ‘teachmeets’ — on relevant topics of course. The Society of Authors, for example, is currently running a program of online talks and discussions. These range from “worthy” topics like how to market your books and tax rules for freelance writers to “afternoon tea with Roger McGough”. If a stationery company ran such events, people would be scratching their heads. But the Society of Authors? A perfect fit.

The authors talk about a “Goldilocks zone”, where the thing you’re offering as a prize or giving away is just right — not too big, or too small. Applied to an ed-tech company, for example, offering a competition prize like replacing the entire school’s computing systems and infrastructure and giving every pupil and member of staff a free iPad (see above) would probably be construed as too good to be true.

A more reasonable option would be, say, one licence for your premium software product. It would be less likely to be regarded as probably over-promising and under-delivering. It would also be better for your company. That’s because of the final criterion.

If you give away some hugely expensive freebie, how can you repeat that or build on it without going bankrupt in the process? Indeed, the whole point about creating a repeatable experience is that it has to be repeated, time after time, for every customer. Perhaps it is something as simple as giving away a mini-computer kit — screen cleaner, high capacity USB stick, and a troubleshooting guide — with every purchase of a computer system. Something like that may not be enough to swing a purchasing decision in your favour, but it might well be something that customers talk about.

There’s a lot more in this book than has been possible to include here, but the question remains: is it worth buying? There’s a lot of information in it, gleaned from original research. It is set out logically, with a handy quick reference guide at the back.

The only caveats are first, it’s American. Whether or not all the suggestions would work in the UK has not, as far as I am aware, been tested by the authors.

Second, as it’s a general book, there seem to be no examples of “talk triggers” created by ed-tech companies. However, there is enough guidance here to help you devise your own.

Talk Triggers is published by Portfolio, or you can buy it on Amazon by clicking this link: Talk Triggers. In the interests of transparency please note that I was sent a free review copy and that link is an affiliate link. Neither of these facts has influenced this review. 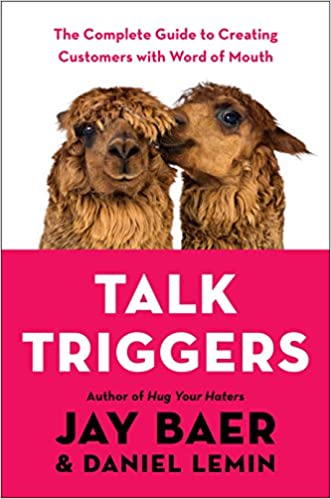